For those new to lists of this nature, the species list and scientific names which follow are listed in alphabetical order. Some of the names may be unfamiliar, but follow the recent recommendations of the British Ornithologists Union which have been adopted by the Scottish Ornithologists Club.  Historical records have been included where there is a reasonable provenance. Otherwise, rarer species have only been included where the record has been published in official reports such as the Atlases, or accepted by the Local Recorder or, in appropriate cases, the Scottish Records Committee.  Three committees oversee rare records.  The Highland Records Committee (HRC) for local rarities; the Scottish Birds Records Committee (SBRC) for scottish rarities (http://www.the-soc.org.uk/sbrc.htm); and the British Birds Rarities Committee (BBRC) for british rarities (http://www.bbrc.org.uk/).  Rarities have been identified in the species list by the use of the appropriate committee initials.  In respect of these rare birds, and others not listed, a full description will be required.  Photographic evidence can also be extremely helpful.

Because Skye has never been a recording area in its own right, and is part of the wider Highland recording area, it is accepted that this 'list' may be incomplete.  We welcome any additions and will update things as we go. As things stand the Skye species list shown below stands at 267, and an effort has also been made to comment on status. 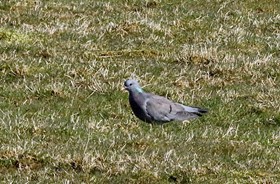 the only record is an adult at Lower Milovaig, Glendale on 23.2.2019 which remained for several weeks (SBRC)

The book is available online to UK for £15.00 + £2.00 P&P via the PayPal button below. International buyers or any other enquiries please contact me for costs including shipping to your country.