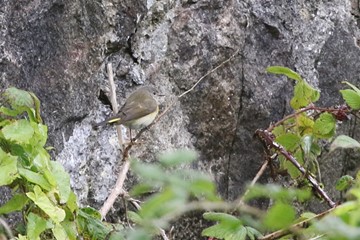 With its proximity to the Atlantic the Western Isles has developed a reputation over the last 20 years or so for producing scarce migrants, many windblown across the Atlantic. The discovery of an American Redstart on Barra was extremely tempting, only the 2nd record in Scotland, and the 6th in Britain. The risk is always that birds disappear before you get there but my friend Andy and I made the double ferry crossing keeping a close eye on the bird network systems. We arrived early afternoon on Sunday 10th to typical hebridean weather of strong winds and heavy rain, conditions not ideal for the bird showing. With over 100 twitchers visiting the island since the 9th when it arrived we were delighted to have the place to ourselves and despite the weather, the bird showed well (see image). Had such a bird turned up at a more accessible location thousands may have gone to see it. One enthusiastic and well off group of birders flew from Manchester in a charter plane only to crashland a short time later - luckily all escaped safely. Other charter flights did land on the famous Barra beach. Content with two ferry crossings we made our way back delighted to find another american visitor, a Semipalmated Sandpiper on South Uist. One was found a few years ago by Martin Benson in Broadford Bay but it was a first in Scotland for Andy, always a special buzz when it is self-found. As I have reached a significant age this year, I'm keeping a Scottish Year List which has now reached 199! Bob