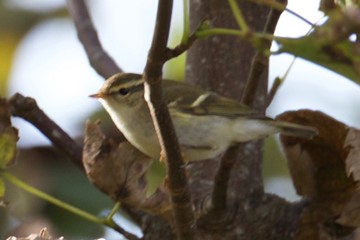 Though several species reports have still to be ratified by respective committees, we have now reached 260 species. Some 20 new species have been added in the last 12 years or so and there have already been 4 in 2016, the last of which is Yellow-browed Warbler found by Neil Bennet and Martin Benson (see image). The other recent record was Great White Egret and in some respect, both of these were predictable. Skye has never enjoyed too much observer coverage and it is probably as strong now as it ever has been. This has certainly helped our species list to grow as has the number of people happy to share their sightings. There is sometimes a concern that when a rare bird turns up, hoards of people will arrive to observe it. That is far from the case and might only happen in the event of a national rarity so please be assured that feeding information into the system, would not result in an invasion. The sharing of information amongst likeminded individuals, and the learning experience which follows can be of immense benefit to all. It is difficult to know what might be next as it is proving an exceptional autumn with American vagrants arriving on the west coast and far eastern ones arriving on the Northern Isles. It might even be just a Jay, never recorded on Skye but present in nearby mainland areas. We can all look forward to see the list grow.