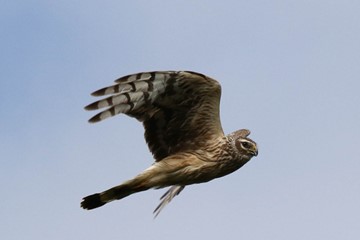 I first started studying Hen Harriers on Skye in 2000, so now have 16 breeding seasons under my belt. Whilst my numbers have significantly declined since the number of pairs reached double figures a few years ago, the 2015 season looked reasonably promising with at least 6 pairs, and possibly 7 in my north Skye study area. It was a cold, wet spring and probably little surprise that only 4 pairs attempted to breed. It is not known what happened to one pair which were in a new site but they failed on eggs. Another two pairs hatched young but these were probably predated by foxes. I checked another nest today where the female was still sitting on eggs after 6/7 weeks so the eggs are clearly infertile, and will be uplifted under licence and sent for analysis. The female is pictured in the image - she does not have a yellow eye which is an indication that she is perhaps a first summer bird, which may explain the failure. For the first time in my 16 year study, no young have been produced in the study area. Social media is currently alive with debate about the threats facing Hen Harriers, almost exclusively targeted at gamekeepers and estates. There are no human threats to Hen Harriers on Skye. The threats are natural and the weather may also be a factor. Whilst there are threats elsewhere on grouse moors, Hen Harriers have bred in many areas in the west of Scotland not managed for shooting, and here their breeding success can be very mixed. Sometimes I wish the cyberspace experts would get off their arses and spend some time in the field. They might then appreciate that the problem is rather more complex. I am grateful to the many individuals who send me records which are all extremely helpful. Many hundreds of hours of effort go into this study every year and there have been many disappointments, although this is the first time I have drawn a blank. The only consolation is that with help from David Mason, a nest has been located in Lochalsh and that has fledged three young.