Another trip to Spain 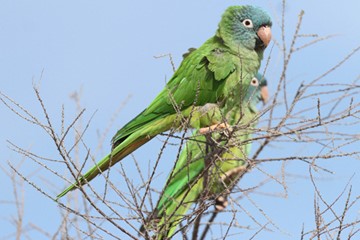 Whilst Skye enjoyed some pretty settled winter weather, we disappeared to Spain for a few weeks, primarily to visit family, but also to look for birds in Catalonia and Aragon. Carrying a Skye 'man cold' did not help, and we certainly experienced a range of weather. Barcelona is always a wonderful city to visit and its many parks host a variety of species, many of them escaped from captivity and now thriving. There are several species of parakeet and the image shows a pair of Blue-crowned Conure which we found, one of the rarer species which originates in south America. Over the three weeks we managed to record 126 species and the overseas Gallery on the site displays some of the images. Highlights from local Barcelona sites such as Llogrebrat included some early hirundines, Garganey and Red-crested Pochard. The Ebre Delta is a huge area and after three visits we are starting to get to know our way around. There were loads of Greenshank, Green and Wood Sandpipers with literally hundreds of wintering Little Stint. We only managed to spend a few days in the midi-Pyrenees in Aragon based in a converted farm building at about 3000 feet. Seeing Golden Eagle was a reminder of home and the occasional Lammergeir a bit of a bonus. A flock of 16 Hawfinch and a nice male Brambling, very rare in these parts, were unexpected extras. A pair of Alpine Chough proved very obliging at a nearby reservoir where I spent several hours searching for Wallcreeper - fast becoming a bogey bird for me. This is a wonderful area to visit and I am very happy to provide advice and suggestions on where to go.