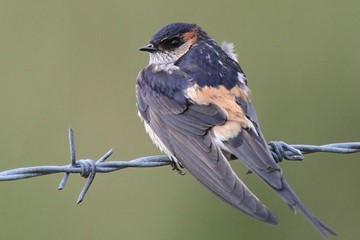 The Carl Zeiss Award has been running since 1991 and is presented for photograph(s) judged to have been the most instructive in the BBRC's assessment of rarities during the previous year. Ian Fulton's images of a Red-rumped Swallow at Talisker Bay, one of which is shown here, have won the award. As described in the blog of 8th November, 2011, Ian's images have allowed the bird to be confidently assigned to one of the migratory asian races, and thus make it potentially a first for the British list, a decision which remains pending. Ian will be presented with a pair of Zeiss binoculars at the British Bird-watching Fair next month.