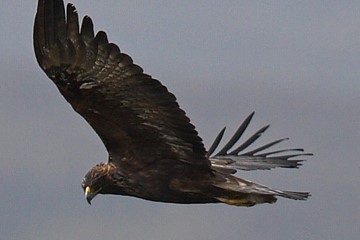 After celebrating a day on Canna with eagles it is sadly a reflection of the times we live in, that our next blog brings news that the Police are appealing for information after a golden eagle was found dead near Morar, Lochaber in March.A post-mortem conducted by the Scottish Government laboratory of Science and Advice for Scottish Agriculture showed that the eagle had been poisoned with banned pesticides. A multi-agency investigation continues, involving Northern Constabulary, National Wildlife Crime Unit and RSPB Scotland. This is the third known eagle poisoning incident in the area over the last ten years, with two white-tailed eagles previous victims.Ian Thomson, Head of Investigations for RSPB Scotland said: “Despite the hard work being done by the police and partner agencies, some individuals continue to disregard the law, and public opinion, by killing protected birds of prey. Sadly, this is just the latest in a long list of golden eagles found poisoned over the last few years, and that only represents those actually discovered. Who knows how many of these magnificent birds are killed but never found? We condemn the actions of those who continue to kill Scotland’s birds of prey, and hope that any one with information related to this or other wildlife crimes will step up and pass this to the police or contact Crimestoppers”. The eagle was fitted with a satellite transmitter in 2010 prior to fledging from a nest beside Beinn an Tuirc on the Kintyre peninsula. Chief Inspector Matthew Reiss, Northern Constabulary’s Wildlife Crime Coordinator said: “Wildlife tourism is an increasingly significant income generator in the highland economy, and particularly so in the West Lochaber area of the Highlands. Poisoning is indiscriminate - it could be your pet dog - or even a human - that could be killed simply by contact with such illegal poisons. This is a completely unacceptable and illegal practice. People who use illegal poisons are threatening the economy by killing the very wildlife that people visit the area to enjoy viewing. These visitors are contributing significant spending in the area, so crimes such as this are also threatening the jobs of people directly and indirectly reliant on the income derived from wildlife tourism.” Anyone with information relating to this case is urged to contact Crimestoppers on 0800 555 111 or Northern Constabulary on 01463 715555. An increasing number of large birds of prey are fitted with satellite tags and unfortunately an increasing number are failing to survive reflecting the fact that persecution remains a problem in rural areas. Unfortunately when several months elapse before such a high profile crime becomes public knowledge, the chances of new information being found decreases somewhat. Although RSPB suggest this is the third victim of poisoning in the area we are aware that a White-tailed Eagle was previously shot in the area and another found dead recently in suspicious circumstances. Unfortunately Morar is a classic example of a 'black hole' and it is unfortunate that no persons have yet been charged in relation to any of these incidents.