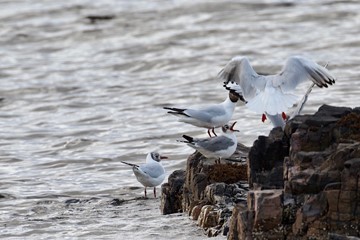 In comparison to previous years 2022 was a relatively quiet year in the area for new or unusual birds with a total of 183 different species recorded.  A Little Egret at Glendale on 1st February was our first winter record of a species which continues to expand northwards.  Reports of Jay continue to increase especially from Lochalsh.  A Nuthatch was at Aird, Sleat, on April 4th and a drake Mandarin at Kilmarie, Strathaird, on April 22.  A Great Shearwater was unfortunately found dead at CamusunaryBay on July 21.  The best bird of the year was a Franklin’s Gull, found by Martin Benson in Broadford Bay on 31stJuly, the first record for Skye and Lochalsh and a super “garden tick”.  There was a record count of six Little Stint in Broadford Bay on 9th September and a similar count of six Mediterranean Gulls at Loch Portree on 9th October.  A Common Rosefinch was caught and ringed at Kilmuir on 29th November and a few Waxwings brightened up the late autumn.  The year will be remembered for outbreaks of avian influenza which brought hundreds of dead seabirds to our west coast shores, and the notable absence of records of species such as Great Skua.  The lack of any strategy to deal with carcasses of dead birds has also contributed, to casualties amongst birds further up the food chain, including White-tailed Eagles.  It can only be hoped that 2023 will bring better news for a disease often blamed on wild birds, but which originated in domestic poultry.