Bonxies on the Brink 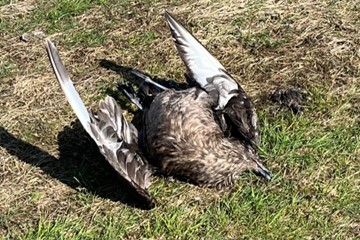 The Bonxie or Great Skua is a relatively recent colonist of Skye and Lochalsh but it has become an increasingly common summer visitor.  Its first mention on Skye was in 1942 but by the early 2000’s it could be seen regularly offshore and young birds were starting to summer on many of our headlands.  These original colonists were thought to be from an established colony on Handa in Sutherland.  By 2009 it was thought to be breeding on Staffin Island and on Fladday, Raasay.  Since then, it has bred on most of our offshore islands and many headlands including Neist Point.  Birds are a familiar sight to many of our fishermen and will regularly follow creel boats looking for discards, some becoming quite tame and feeding from hand.  Many readers will be aware of the problems of Avian Influenza in wildfowl, and now affecting large numbers of our seabird populations. AI was first found in Great Skua populations on St Kilda, Fair Isle and on the Shetlands in 2021.  The situation has deteriorated even further this year with the entire St Kilda population wiped out and other colonies in the Northern Isles seriously affected.  Gannets have also suffered badly, and the problems are now extending to auks, gulls and terns.  Some authorities are now suggesting that the entire population of Great Skuas is now at risk.  Whilst there is little evidence of mortality on Skye and Lochalsh, we are concerned that birds are absent from established breeding sites, and that reported numbers are lower than normal.  One of the problems is that there is a complete lack of coordination by statutory bodies such as Nature Scot, so measuring the extent of the problem, and coordinating a response to ensure adequate testing and removal of infected carcasses has been woeful.  Whilst the advice is to contact DEFRA, colleagues in east Highland have waited weeks for any response.  Meanwhile infected carcasses have lain for lengthy periods on beaches with the added risk to other species.  Whilst wild birds are blamed for the spread of this disease, it should be stressed that its origins are in the domestic poultry industry.