Birds in Skye and Lochalsh 2021 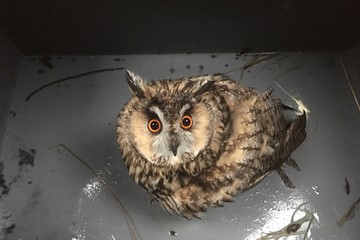 Although its not yet the end of the year as I write this, 2021 has been a good year for bird recording with 190 species found in the area.  This included two new birds, Stock Dove and Roseate Tern.  Stock Dove was probably long overdue, but Roseate Tern was unexpected, its presence off our west coast only being detected by satellite telemetry.  Other highlights included a Common Crane at Dunvegan, Common Rosefinch at Kilmarie, Barred Warbler at Drumfearn, Black Redstart at Tokavaig, Hoopoe at Fiscavaig, Turtle Dove at Kilmuir, and Nuthatches at Kyleakin and Dornie.  A number of interesting sub-species were also recorded.  A Scandinavian Rock Pipit was found at Ullinish and Siberian Chiffchaffs at Uig and Drumfearn, firsts for the area.  An American Black Brant in Broadford Bay on April 27 was only the 4th record in Scotland.  Overall, it’s been a good year and although spring was cold, there were lots of voles around so in particular, Long-eared Owls had a very good breeding season and there were more reports of Short-eared Owls than normal. Reports of Jays continue to increase, especially in Lochalsh.  At the other end of the scale, Goldfinch numbers continue to increase with some large flocks seen in the autumn.  Scandinavian thrushes have been slow to appear for the winter with Fieldfares very late despite a bumper Rowan berry crop, with no signs of Waxwings.