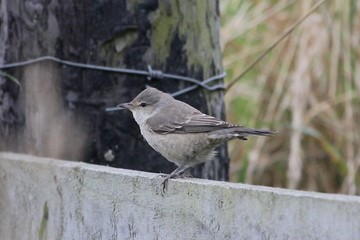 There is considerable history for this rare vagrant in Skye as a bird was shot near Broadford Hotel on 16.8.1884.  It was initially mis-identified even though it was dead!  However, once confirmed as a Barred Warbler, coming from Eastern Europe, it became the 1st record for Scotland, and only the 2nd for Britain.  The next record was in 1971, when Ted Gerrard who was living on Pabay at the time, caught and ringed three birds.  It is now a regular late summer vagrant in Scotland but because of its skulking behaviour, it is quite challenging to find, especially at a time when there is so much long vegetation and cover.  A bird was found in Dunvegan in 2001 and although there has been at least a couple of “possibles” since, the species has remained very elusive.  Phil Knott was walking the pram through Drumfearn on 27th August this year when he had several fleeting views of a chunky grey warbler which he was confident was a Barred Warbler.  Phil has extensive experience of the species both in Scotland and abroad which is a considerable help when birds don’t obligingly sit up and perch!  Though I joined Phil on the pram walk there was no further sign.  However, I did return in the afternoon and the bird crossed the road in front of me in the same area as before, frustratingly, disappearing into vegetation.  However, having seen birds previously, I was confident it was Barred Warbler. This is the 2nd rarity in Drumfearn in recent months.  If you look at the distribution of rare bird records in Skye and Lochalsh over the years, it tells you more about where good birdwatchers live and are active, than about the habitat which might attract rarities.