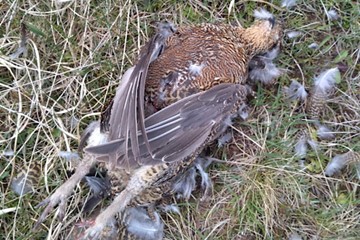 At Kilmory on Rum today Sean Morris observed a Golden Eagle carrying prey, a still alive female Red Grouse.  The Eagle, most likely an adult, landed with the prey near the beach but was being mobbed by Gulls and Crows.  There were also deer close by and a hind with a two day old calf.  The hind ran at the Eagle and chased it off obviously fearing the bird might attack the calf.  The Red Grouse (image) was left behind but died.  As the Eagle flew off it was also attacked by an alarming male Merlin, as well as Common Gulls.  It perched briefly but clearly decided the Grouse was more trouble than it was worth and eventually flew off.  Sometimes life is not smooth for our apex predator.  There are recent images of a life Red Grouse in the gallery.