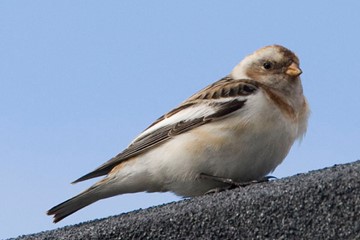 There are several English names for the Snow Bunting and in gaelic it is known as Eun an t-Sneachda, whilst in Shetland, perhaps my favourite, it is referred to as the Snaa-Fool!  Snow Buntings breed in small numbers in Scotland and in the past probably bred in the high peaks of Kintail and in the Cuillin.  With global warming, the numbers of breeding birds has probably reduced, though they are still present on Ben Nevis and in the Cairngorms.  However, the majority of our local sightings occur in winter and probably involve Icelandic and Scandinavian migrants.  Many of these visitors will stick to the hills and are mainly seen by winter walkers and others on the hill, but during bad weather they will often descend right down to sea level.  They are often seen at roadsides picking up grit and discarded seeds.  Favourite spots are often beside areas where cattle and sheep are being fed.  We are currently experiencing some pretty tough winter weather, and birds may well have been pushed west by the cold conditions.  Good numbers of these black and white beauties have been reported this winter from the Kylerhea Road, from the Heaste Road, and down to sea level at Duirinish in Lochalsh.  You can even get birds in gardens, and when we lived in Elgol, two birds once remained with us for several weeks helped along by some scattered seed, and often perched on the roofs like sparrows - see image.  Indeed, if you visit Iceland you will regularly see birds perched on roofs and feeding in farmyards, an Icelandic equivalent of our local House Sparrows.