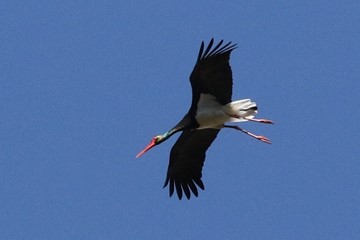 For the last 30 years bird recording in Lochalsh and the name Brian Neath has gone hand in hand.  Brian has been a long term stalwart of the South West Ross Field Club and for years has co-ordinated Lochalsh bird sightings for the annual Highland Bird Report.  Not just birds, but Brian was also the Moth and Butterfly recorder for the area and has made a significant contribution to the Natural History of Skye and Lochalsh.  Brian was the first to compile a list of the bird species recorded in Lochalsh, and personal finds of a Palass’s Warbler in 1990, and a Nuthatch in 2010, were both in the Dornie area and 1sts for Skye and Lochalsh.  For health reasons Brian is no longer able to keep the Lochalsh list up to date, but I have recently managed to update this and the list now stands at 197 species.  These include a Surf Scoter in Glenelg in 1985, a Roller at Erbusaig in 1995, and a Red-footed Falcon at Dornie in 2007.  Another highlight was a Black Stork seen by Elgol schoolchildren on a trip to Kyle swimming baths in 2010.  Perhaps the rarest species recorded was a Yellow-breasted Bunting found singing at Ardelve in 1982, a record which was confirmed by the British Birds Rarities Committee, and which I was privileged to see all the relevant paperwork.  It is the only spring record of a singing male in Scotland.  The most recent addition to the Lochalsh list was a Velvet Scoter found by Phil Knott at Glenelg.  All these sightings confirm, if it was needed, that there is a rich variety of bird life to be found in Lochalsh, for those prepared to make the effort.