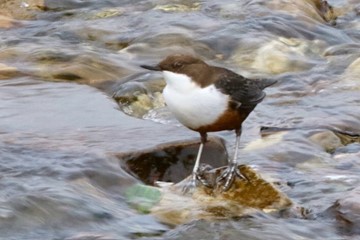 Dippers or Water Ouzel (Ghoba uisge) are distributed throughout Skye and Lochalsh, though it’s a challenge to determine what their numbers are, and whether these are increasing or decreasing.  They prefer fast flowing unpolluted streams where they can walk underwater in search of their main food source, insect larvae.  A small, plump, black and white bird they are often seen bobbing on rocks before descending into burns and rivers in search of prey.  The male song is often heard in the middle of winter, as they nest early, their domed mossy nests, usually built under banks or bridges, and sometimes at risk from spring floods.  Dippers can be best seen in winter as they descend the burns to sea level and can be often observed along the shore.  In contrast, in open winters, they will remain near the head of burns and only recently there was a bird on a small lochan near the summit of Bealach na Ba on the road to Applecross.  A resident with us throughout the year, they are extremely hardy and seem to cope extremely well with the vagaries of our weather.