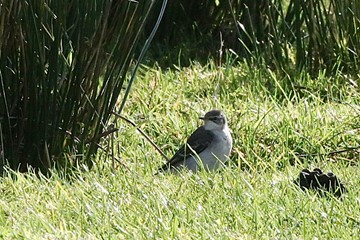 Unfortunately the Small Isles have not been the easiest of places to visit during the last few months. Very much our nearest island neighbours, we have always included interesting sightings from the islands on the Skye Birds website, and over the years some stunning birds have been found.  Just a few days ago I received a call from John (the bird) Chester on Eigg.  He had found an unusual Yellow Wagtail on what was a pretty late date, and furthermore It was a very grey looking bird.  This caused my pulse to race as it’s only a few years ago that Western and Eastern Yellow Wagtails were split into different species and the lateness of the date and the colour suggested an Eastern bird.  Techniques in bird identification have moved on and the the only way to clinch identification was either to record its call or get a sample of its poo for DNA analysis. Armed with a sound recorder I managed to hitch a lift courtesy of Arisaig Marina from Armadale, and duly landed on Eigg and met up with John.  Though the bird was quickly located it was extremely elusive but we managed a few photographs and a sound recording of the call.  RESULT - on analysis of the call and the creation of a sonogram by a friend, it was found to be Eastern Yellow Wagtail which normally breeds in Mongolia and winters in Japan. Sonograms are the equivalent of sound fingerprints.  If accepted by the British Birds Rarities Committee it will be the 6th record for Scotland, and the 1st away from the Northern Isles.