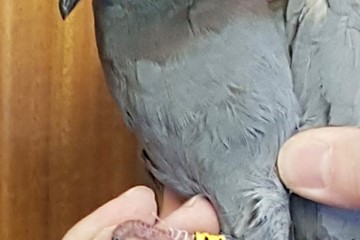 I have written previously about our use of the term seagulls to describe a range of different species of Gulls, and similarly, we use the term pigeons to describe several species. However, our pigeons are a far cry from the feral pigeons which you find on city streets. With the spread of forestry plantations, Woodpigeons have become much more common and breed widely. However, the bird which visits your garden or you see on the shore is most likely to be a Rock Dove and we are lucky as the majority we have in the area are pure bred, nesting and roosting on sea cliffs, but which have become adept at visiting garden feeders. Jonathan Jones from Portree has started a local study which involves colour ringing Rock Doves, in an effort to find how far the birds might be ranging, and where they might be breeding. The image shows the colour rings and if you see any birds with rings Jonathan would be pleased if you would contact him through this site. This is part of wider research being carried out by a PhD student at Oxford University, examining the relationship between feral pigeons and Rock Doves, and their distribution. Whilst most of our birds are pure there are occasional birds in the flocks with different plumage characteristics, which suggests some inter-breeding may be taking place. Finally, and just to confuse things further, Rock Doves are occasionally mistaken for Stock Doves, a species which can be found in Highland but on the east coast, and which is extremely rare in the west.