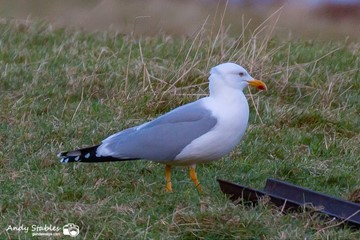 Despite being a birder for more year's than I can remember, prompted by a few friends, I only started seriously listing a few years ago and my Scottish list kept ticking along during 2019. Apart from chasing the finds of others, I managed to make my own contribution with a self found Blue-winged Teal at Mellon Charles in March, and a Long-billed Dowitcher in South Uist in September. The biggest rarity was probably a Blue Rock Thrush in Orkney, potentially only the 2nd record for Scotland, seen on a crazy day safari from Skye. As always there were a few dips on the way including a frustrating Myrtle Warbler on North Uist, but this was topped by a Cliff Swallow at Loch Poolteil, a 1st for Scotland which only remained for a few hours. A Yellow-legged Gull was another addition to the Skye list along with a historical record of a Richardson's Cackling Goose. My annual Scottish list reached 227 species with several trips to the Western Isles and a great holiday on North Ronaldsay helping this along. As always this total was greatly helped by birding friends to whom I'm grateful. Many thanks also, to all who have contributed records to this website and I wish you the best of birding in 2020.