Its an ill Wind 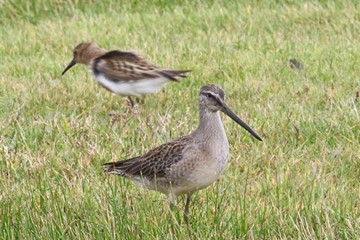 Hurricane Dorian brought tremendous human tragedy and grief as it ravaged the Carribbean and tore up the east coastof America and Canada. Storms of this nature in September invariably displace some migratory birds and with a fortnights holiday planned in the Western Isles there was an expectation that american birds might make landfall there. American waders occur with increasing regularity in Lewis, Harris and the Uists. When a friend found a Long-billed Dowitcher at the Butt of Lewis within days of us arriving the omens looked good.(see image) I was then lucky to find another in South Uist a few days later. This was a new Scottish tick for me so I was absolutely delighted. Other american vagrants included, Buff Breasted Sandpiper, American Golden Plover, Semipalmated Sandpiper, and Pectoral Sandpiper. The one yank which evaded me was White-rumped Sandpiper but thats for another day. Another scottish first was a Bonelli's Warbler which curiously had arrived from the east. Huge numbers of Sooty Shearwaters were seen at the Butt of Lewis. We even managed to encounter a pod of Orcas just out from Tarbert from the ferry at the start of our trip. This was not the normal west coast pod, but was 7/8 strong - according to the experts a mystery pod which they are still trying to identify. The western isles once more produced the goods.