Persecution of Birds of Prey 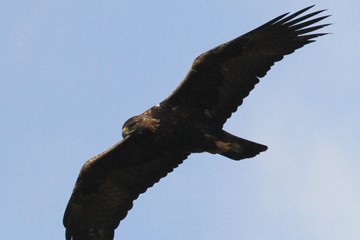 National news networks have carried stories in the last few weeks about the disappearance of two satellite tagged Golden Eagles, and the illegal trapping of a Hen Harrier in Central Perthshire. This is an area I know well and persecution was a major problem when I first started monitoring birds of prey in the Crieff and Aberfeldy areas almost 50 years ago. It seems little has changed, and landowners and gamekepers on many grouse moors remain a law unto themselves for a so-called sport, accessible only to a privileged few. Since a satellite tagged Golden Eagle called Alma was poisoned in the Angus Glens in 2009, almost 50 other sat tagged Golden Eagles have disappeared suspiciously almost exclusively on grouse moors. For centuries, driven grouse shooting has remained unaltered, unregulated and unaccountable. There is now mounting pressure on the Scottish Government to introduce legislation to licence grouse moors. There are no longer managed grouse moors on Skye but that was not always the case and associated with it was the destruction of Golden Eagles. In a 4 year period between 1927-1930 ten Golden Eagles were killed on the Tormore shootings of the MacDonald Estates – Tormore was managed as a grouse moor at that time and Golden Eagles were protected. Most grouse moors on Skye were developed for forestry. Luckily we now have a good population of Golden Eagles on the island and also still small numbers of Red Grouse. Fortunately, incidents of bird persecution on Skye are rare but as this is published there is news of another male Hen Harrier trapped on the Leadhills Estate in Lanarkshire, another notorious black hole.