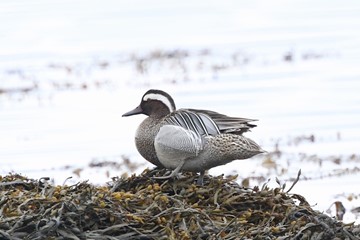 Garganey is an extremely attractive duck species which winters in southern Europe and Africa and migrates north to breed mainly in northern Europe and Russia. Scotland is at the western limits of its range and there was only a single record in Skye, with Baxter & Rintoul finding 4 males and 3 females at Loch Suardal, Dunvegan, on March 28th, 1943. Dr Evelyn Baxter and Miss Leonora Rintoul were leading figures in Scottish ornithology in the middle of the last century, recording widely and visiting Skye on several occasions. It was unusual for women to play such a prominent role in ornithology at that time but they were responsible for several ground breaking publications including the classic ‘The Birds of Scotland’ in 1953. Their Garganey find at Loch Suardal in 1943 has been the only record on Skye until April 27th this year, when a beautiful drake lingered for a few hours at the mouth of the Broadford River. It had taken 76 years for the 2nd record, and appropriately enough it was found by another woman, Diane Penman, a visitor from Fife.