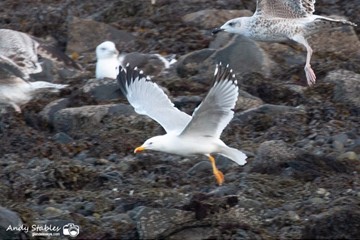 Patch watching can be extremely rewarding and for Andy Stables at Lower Milovaig it has brought a number of rewards. The latest of these was on 23rd February when Andy found a Yellow-legged Gull viewable from his front door. Unfortunately he only managed a single image from a distance and this is a notoriously difficult species to confirm identification. Fortunately the bird reappeared again on March 3rd when improved images were obtained and it has since been seen by a number of local observers. Yellow-legged Gull is similar to Herring Gull but its breeding range is from the Azores across the Mediterranean and it remains a rarity in Scotland. It is only the 3rd record for the Highland recording area and a first for Skye. However the sighting still has to be ratified by the Scottish Birds Rarities Committee (SBRC). It would bring our total species list to 267.