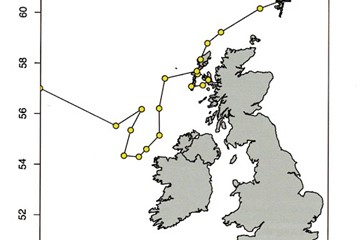 This is a tiny wader, little bigger than a sparrow, which spends most of its time at sea. It is a summer visitor to Scotland and breeds in small numbers in the Western Isles and on Shetland. Little had been known about where it spends its winters. In the last few summers a number of birds have been caught in Fetlar on Shetland and fitted with tiny geolocators. Trapped when they returned to breeding grounds the following year these have revealed that the Shetland population crosses the Atlantic and uses Pacific wintering grounds off the west coast of south America. In so doing they join up with the breeding population from Iceland, Greenland, and North America.

Red-necked Phalaropes have never been known to breed on Skye and there are only a few records from Skye in recent years. What this research shows is that the bird named B/B following its departure from Shetland on 23rd July, 2016, visited the Western Isles then had a quick trip over the Minch to visit Skye at the end of July, then Canna, before continuing its westwards journey to eventually reach its wintering grounds in the Pacific. Had it not been for the scientific advances in the use of geolocators, this amazing migration might never have been unlocked. A truly amazing feat for such a tiny bird and perhaps understandably, its brief visit to Skye was never recorded until now.