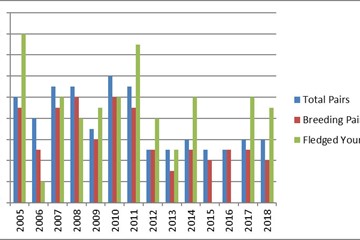 The weather was exceptional throughout the main period of the breeding season. In the North Skye study area there were probably 6 territories occupied either by pairs or single birds. This population has remained relatively stable since it crashed in 2013. Much of this area was affected by extensive hill fires in early spring 2018 which as well as removing some historical nest sites, also reduced foraging opportunities over significant areas. Although 5 pairs may have bred, information on an island breeding pair was inconclusive. The four remaining pairs were successful producing a total of 9 fledged young and as far as can be established, no nests were predated. In south Skye and Lochalsh there were at least 5 territories, two of which were new and it is suspected young hatched at all sites. Unfortunately, three subsequently failed with fox predation being a factor at one site, and unknown causes at the other two. The other two nests produced at least four young. Overall results were that of 11 known territories in Skye and Lochalsh, 6 were successful producing a total of 13 young. Three nests were known to have failed at the stage when young were in the nest. It is suspected a single male in one territory failed to attract a female. Whilst an adult female was seen on an island site breeding was not proved.

Disturbance at nest sites was avoided. Historically there has been a problem at nest sites due to fox predation. Foxes are known to follow human trails. However, by avoiding visits to nest sites in the last two seasons, there is already some indication that breeding productivity has increased as shown on the attached table which relates to north Skye.

Many thanks to everyone who has contributed records.