Shetland trip in May 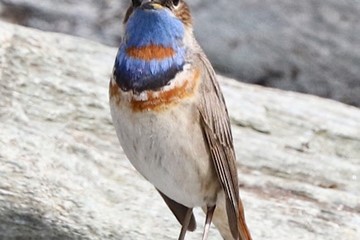 Just back from a superb week on Shetland which coincided with some easterly winds which dropped a good number of migrants on the islands. Many of these rarities remain for only a few hours so the chances of connecting can be remote. That was the case with Marmora’s Warbler and Grey-faced Bunting which appeared on Unst very briefly and were absent the following morning. Clear overnight weather had enabled them to correct their bearings and move off east. These were migrants from the east and by contrast a Song Sparrow on Fair Isle was from America and it remained for several days along with a Crag Martin - I might regret not making the effort to follow these up as they stayed for some days. However there were other highlights, the best of which was connecting with two male Red-spotted Bluethroats, truly spectacular birds in breeding plumage, and my first in Scotland - see image. I also managed a lifer with a Terek Sandpiper which made a conveniant appearance 15 minutes drive from our accommodation. Other birds of note included a Common Crane, Red-backed Shrike, Lesser Whitethroat, Marsh Warbler, and a drake Garganey, just an indication of why Shetland proves such a lure for birdwatchers both in spring and autumn. Having said all that my list for the week was probably much smaller than it would be here with no woodland birds, and no calling Cuckoos. I also failed to see a bird of prey for the whole week. However, it was a pleasure to drive on terrific roads with no potholes, and what tourists there were, merged nicely with the scenery. There are more images in the Gallery.