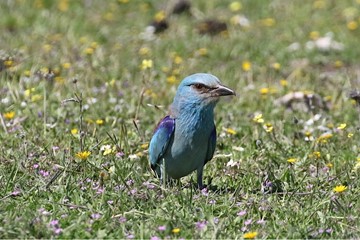 Extremadura is one of the premier birding areas in Spain especially during the breeding season, a top area for raptors, vultures, and steppe species such as sandgrouse and bustards. I had visited the fringes of the area before but a trip with www.western-isles-wildlife.com provided the opportunity to get to grips with some old favourites and hopefully tick off some new ones. We flew from Edinburgh direct to Madrid so it is fairly accessible from Scotland. A total of 18 raptor/vulture species were recorded including Spanish Imperial Eagle and Black Shouldered Kite. Bee Eaters and Rollers were arriving but maybe just too early for Golden Oriole. I did manage to add 5 species to my Spanish list which now stands at 249, including Spectacled and Subalpine Warbler. Great Spotted Cuckoo were found in the grounds of our rural guest house along with a huge flock of Spanish Sparrows. The trip list for birds stood at 143 which gives an indication of the ornithological diversity in the region. We recorded 13 species of Butterfly including Spanish Festoon, Spanish Marbles White and Nettle Tree. It was also Orchid season and these included Woodcock, Yellow Bee and Naked Man. A region rich in biodiversity which is well worth a longer visit, and where eco-tourists are well catered for. See the overseas gallery for a range of images.