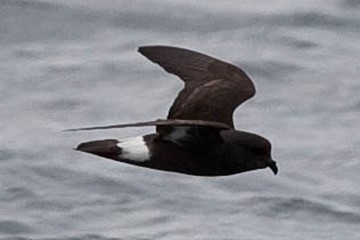 Barely the size of a House Sparrow, Storm Petrels spend their time at sea and the only time we might get a chance of seeing them from land is when they are blown inshore by storms. You can regularly see them on ferry crossings in the summer but they spend winter months in warmer oceans. They breed on remote islands off the west coast but proving breeding on Skye has been a long historical challenge. In August 1772 Pennant claims he found them on MacDonald's Tables (Fladda Chuain) off the north-west of Skye "where they lurked under loose stones but betrayed themselves by their twittering noise." In the Old Statistical Account for Kilmuir in 1792 the species was again claimed to be breeding on Fladda Chuain. Although Seton Gordon thought it was breeding on some of Skye's smaller islands no proof was provided. The birds nest in burrows or in holes in rocks and only approach their nests in darkness - the challenge is therefore obvious. In recent years occupancy of burrows has been proved by using playback techniques with the incubating birds responding to the calls. The Shiants Ringing Group visit the Fladda Chuain islands annually and found occupied nest sites in 2015 - returning last year they again found occupied nests. Since Pennant's visit, and nearly 250 years on, breeding on Skye by this diminutive sea bird has at last been proved with help from modern technology.