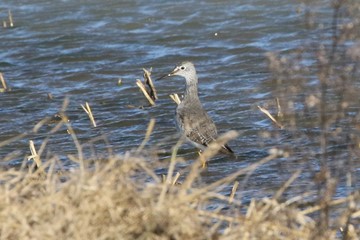 With a granddaughter in Barcelona where Three Kings Day is celebrated more than Christmas, we were keen to join the festivities, hence an early January visit to family. We also managed 5 days away north to San Pere Pescador, and an opportunity to visit Aiguamolls, which has become a favourite reserve, as well as some of the other local sites of interest. Most of the tourist spots are quiet at this time of the year and we enjoyed temps ranging from 12 to 19 and what rain which did fall was mainly at night. A trip to Cap de Creus gave me an opportunity to search for Yelkuan Shearwater, a lifer for me although the views were distant. We explored the ricefields near Pals, another reserve, though with limited facilities. However three Bluethroats were a real bonus, and on a second visit, we managed to locate a wintering Lesser Yellowlegs, an american vagrant well off track (see image). The best bird at Aiguamolls was a juvenile Bonelli's Eagle which caused bedlam amongst the waterfowl. A selection of images are in the Gallery.