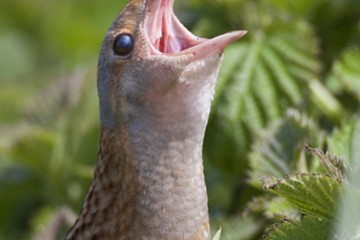 Apologies if you detect a note of disappointment here but the number of these rare summer migrants visiting our shores has dropped again for the third year running. In 2015, we counted nearly 1300 calling male corncrakes in Scotland and only 860 this year. You can see how numbers had gradually been building up since we started formally counting in 1994 on the graph below and then the recent downward trend. We are investigating the possible explanations for this but the decrease across the Scottish range is worrying.

On Skye, only 14 males were counted – down from 25 last year. As usual, these were found mainly on Waternish and Trotternish. The first corncrakes on Skye started called on 1st May, on Waternish and on Trotternish and one in Portree! A single bird was heard on the south end of the island so we can only hope that a female found him. Without the help of Skye Birds, I wouldn’t have known about this bird – so thank you!

The corncrake is a short-lived bird that needs to produce a large number of offspring in order to maintain numbers. It is possible that the past couple of breeding seasons were poor but reasons why this should be are unclear. Their preferred habitat is fertile croft land with enough vegetation for them to hide in – plants that are at least 20cm high, such as nettle, cow parsley, flag iris early in the season, then they move into the hay and silage meadows.

Hiding in vegetation is their mechanism to avoid predation. As you’ll know, this is in short supply in spring on the wild and windswept Isle of Skye. Small pockets of growth are found along dykes and sheltered ditches and some crofters create Early Cover plots specifically for corncrakes to use when they return from Africa. Silage and hay meadows are very attractive to corncrakes because they can hide in the tall grasses and a vast assortment of their prey (e.g., slugs, worms, insects, and spiders), also live there. However, these fields will inevitably be cut and the corncrakes are particularly vulnerable then.

Delaying mowing until the corncrakes have finished nesting and the young are mobile (August) can really improve their chance of survival. Using the corncrake friendly cutting method (starting the cut on the inside of the field and working towards the edges) will allow corncrakes to run to safety without leaving the protection of tall grass. As croft land is so important to corncrakes, it is commendable that so many Skye crofters protect these rare birds by cutting in a corncrake friendly way or delaying mowing where possible.

Your reports are extremely important in making sure we have a record of as many of the corncrakes on Skye as possible so I would like to thank all of you and Skye Birds for your support. If you would like to know more about the work RSPB is doing on Skye for corncrakes please get in touch.