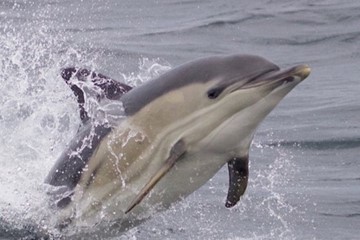 We had been trying to organise an all day pelagic trip to the waters north of Skye but the weather had been against us. Finally we headed out of Portree yesterday on the Aspire and spent 8 hours in the Sound of Raasay, north of Rona, and reached the southern edge of the Burma Bank. Conditions were good though there was still a northerly swell. There were good numbers of Kittiwakes and Auks in the Sound, especially Guillemots so plenty of feeding around which probably accounted for the numerous groups of Common Dolphins encounters, probably reaching totals of 200+ - Andy Williams's image is shown. There were several small groups of Harbour Porpoise and at least one Minke Whale. Another unidentified Whale breached but we were unable to find it. The bird highlights included two Storm Petrels, two Sooty Shearwaters, a Pomarine Skua, 12 Arctic Skuas and at least 8 Great Skuas. But it was the Dolphins which stole the show and we were regally escorted back into Loch Portree. Thanks to Kevin of the Aspire for such a safe and enjoyable trip.