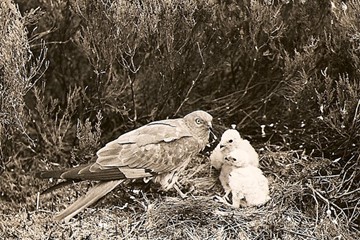 I have just written a paper which has been published in Scottish Birds and the introduction is as follows:-

"The first comprehensive summary of the occurrence of Montagu’s Harrier in Scotland was contained in The Birds of Scotland (Forrester et al. 2007). The author of the species account, Chris McInerny, concluded that had it not been for the criminal behaviour of sporting interests and gamekeepers, at a time of significant range expansion of the species in the 1950s, we might all have been able to still enjoy such a beautiful bird breeding in Scotland. Though Montagu’s Harrier had attempted to breed in Scotland earlier, the first successful breeding was at Braco Moor in south Perthshire in 1952 (Blake 1953, 1977, 2001, Blake & Stephen 1953). Birds were present in the area in successive years, and bred again in 1953 and 1955, which was thought to be the last breeding occurrence in Scotland. This paper provides significant additional information for the historical record."

A pdf of the paper is available here: