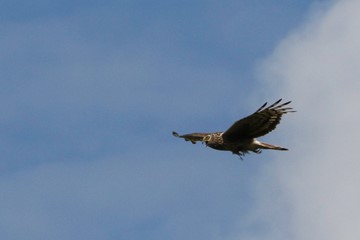 Regular readers of this Blog will be aware that my long term study of Hen Harriers in the area has been beset with years of low productivity due to problems of fox predation. After disastrous breeding seasons in 2015 and 2016, the 2017 season was approached with a degree of trepidation. Not helping was a dodgy knee for which the medical advice had been to stop wearing wellies and to avoid uneven ground...not exactly easy in Skye and Lochalsh. Anyway it was decided to view birds from a distance and not to visit nest sites. I am now delighted to report that of seven active territories located, all have been successful and no fewer than 17 young have fledged. Another territory was occupied by a single adult male. Furthermore, not one of the active territories failed so for the first time since 2000 there were no failures of breeding attempts. Fledged broods ranged from 1 to 4 with a mean of 2.4. Thanks to Neil Roberts a pair was located on an island which could be some kind of strategy to avoid ground predators. By not visiting nests perhaps trails were not left which foxes might follow. Perhaps there are fewer foxes? RSPB recently announced that there were only three successful pairs of Hen Harriers in England attributing the decline partly to persecution on sporting estates. Luckily no such problems exist on Skye although as young birds from Skye disperse in winter, such challenges will be encountered and first year survival is a major problem. David Mason monitored the successful nest in Lochalsh. I am extremely grateful to the many individuals who submit Hen Harrier sightings to the website and to local crofters, and forest managers who host nest sites.