Another Visit to Catalonia 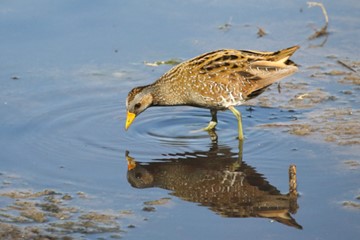 Having reached a significant milestone in life it was decided to celebrate in Barcelona and rent a villa on the Costa Brava, not too far from the Aiguamolls Nature Reserve which is one of my favourites. I have to admit the emphasis was on family and with young grandchildren birding tended to be snatched at appropriate times. However, spring is always exciting and migration in Spain can be tremendous. It was warmer than normal and many of our summer visitors were passing through. Though I recorded over 100 species and added several to my spanish list, the highlight was probably seeing Spotted Crake and managing to take some outstanding images. Though I have heard this species previously on Skye, it is extremely elusive. Several members of the Crake family pass through Spain and can be seen at regular stopping off points where it is just a matter of time and patience. The bird in the image was extremely confiding and I managed to see it on four successive days. Spare a thought for a birder from Arizona who came over especially to add it to his life list but as far as I know failed. Collared Pratincoles were also arriving and to photograph one with a Barnacle Goose was somewhat bizarre - to catalan birders it was the Barnacle Goose which was the rarity. There are some images in the Overseas section of the Gallery.