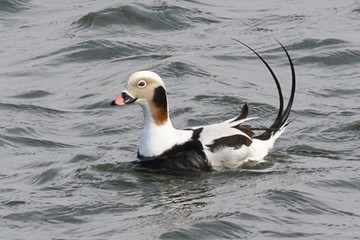 Four of us from the Highlands and Islands set out for a winter trip to Estonia between 11-16 March where the country was still in the grip of winter. It was dry throughout but for the first three days the temperature rarely rose above freezing. On our final full birding day the sun shone and temperatures climbed to 6! We recorded 79 species seen and two heard. Main target species was Stellar's Eider and we managed to find the normal wintering flock which was a bit distant for photographs. Other sea duck including Long-tailed Duck (see image) were plentiful. Like here Whoopers were heading north though these ones were going to breeding grounds in Siberia..and amongst them we found a Bewick's Swan. Other new species for me included Nutcracker, and the diminutive Pygmy Owl, hardly as big as a Starling. Amongst the woodpeckers were Black and White-backed which were new to some of the party. Because of the cold weather many breeding birds leave the country in winter though Yellowhammers, Fieldfare, and most of the Tit family seem able to survive. Estonia is a great country to visit if you are interested in wildlife, with easy driving and reasonable hotels and food. If you want a more detailed trip report let me know. More images are in the overseas gallery.