A Twitching trip to Galloway 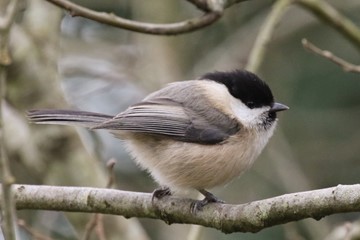 Though Little Egret is a regular vagrant to Scotland and to the Highlands, its cousin the Cattle Egret remains very scarce so the presence of a bird near Stranraer was a bit of a temptation. It also took us near the last remaining population of breeding Willow Tits in Scotland. This Tit once bred in the Highlands and there were historical records for Skye, but its range has contracted significantly. Thanks to the RSPB a small but successful population can be found on its reserves at Wood of Cree and the Ken-Dee marshes in Galloway. Also on our trip list was a Bonaparte's Gull, an american vagrant, which has been turning up at Gourock. To cut a long story short, we managed to find the Cattle Egret, got great views of Willow Tits, but dipped on the gull both on the way down and an the journey home - on the latter visit the bird turned up an hour after we left! The hides at the Ken-Dee marshes were a treat with well stocked feeders attracting all the tits, Great Spotted Woodpeckers and Nuthatch, but the Willow Tits were of course the highlight - see image. There was an obliging drake Pintail at Loch Ryan and a Little Gull at Cardwell Bay. A range of images are in the UK section of the Gallery.