There's no such bird as a seagull! 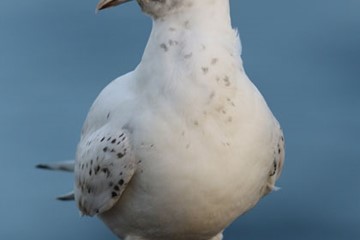 We seem to have reached that time of the year when the media have their annual onslaught on “seagulls”, a term which annoys me intensely. Some twelve species of the Gull family have been recorded in Skye and Lochalsh, and only one of them, the Herring Gull, is liable to steal your chips! Only five of these species breed in the area so most are visitors. If we didnt leave chips,or other human detritus lying around there would be nothing to steal. Winter is the best time for unusual gulls, especially after northerly winds, and in the last few weeks good numbers of white-winged gulls from Iceland, Greenland and arctic Canada have arrived with us. Local fishermen have become extremely familiar with Glaucous and Iceland Gulls many of which follow their boats to pick up scraps and by-catch. Most visiting birds will identify ready food sources so they will also hang around fish farms. Last winter, an Ivory Gull from the high arctic spent two weeks in Uig, the first record for the area, and this attracted many visiting birders - see image. For the last few weeks an Iceland Gull has been feeding on ground churned up by cattle at Tokavaig, one of several recorded in the area. The largest of these visitors is the Glaucous Gull and examples have been recorded in Dunvegan, Portree and Broadford. Other hotspots for visiting gulls are Mallaig and Loch Kishorn, in each case attracted by ready available food sources - produced by man! These are extremely attractive and interesting additions to our wintering birds, and our general biodiversity, so let’s stop demonising them, calling them seagulls, generally giving them a hard time, and enjoy them for what they are...and try and identify them properly.