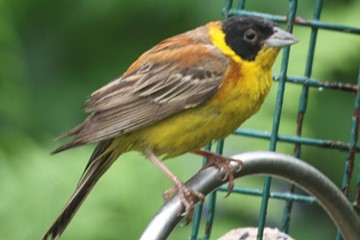 There are an increasing number of keen birders on Skye and with visitors always contributing interesting records, it is inevitable that the recording of rarities will increase. Conversely, the volume of records from Lochalsh seems to be tailing off after many years of stalwart afforts from in particular Brian Neath, so there are birding opportunities out there and important recording challenges. We are grateful to the records received from west Lochaber and the Small Isles. During the course of 2016 a total of 193 species were recorded through the website. A Glossy Ibis at Kyleakin was only the second record for Skye and Lochalsh and the first since 1911. Although Firecrests have been recorded several times on Eigg, a bird at Portree on February 23 was only the 2nd record for Skye and Lochalsh. A white-billed Diver at Uig Bay on February 28 was the first record since 1983, when coincidentally, one was found at the same location. There was a Hawfinch at Dunvegan on April 21. A first for the area was a male Ring-necked Duck found by visiting birders at a loch in Sleat on May 8. A male Black-headed Bunting found visiting feeders at Galtrigill on June 10 was another first for Skye and Lochalsh though had previously been recorded at Mallaig. A juvenile Red-backed Shrike at Waterstein on September 29 was just the 2nd for the area. By an amazing coincidence, a visitor found at Great White Egret at nearby Glendale on the same day, another first for the area. Yellow-browed Warbler had previously been recorded in the Small Isles and was long overdue in Skye and Lochalsh. The unprecedented influx of autumn 2016 brought us at least 5 records in Broadford and on Sleat, with two birds remaining in the Broadford area for at least a fortnight which were seen by many local birders. Finally, A Great Grey Shrike was found near Uig on October 16, the first record of this species in Skye and Lochalsh in 20 years. With four new species for the local list, it has been an exceptional year, and many thanks to everyone for passing on their records which will all be included in the Highland Bird Report.