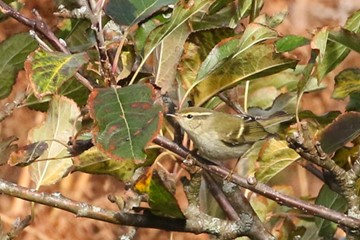 This species breeds across Russia in substantial numbers and normally winters in Southern Asia. Increasing numbers have occurred across Britain in Autumn and though numbers may be inflated by easterly winds, increasing records have also suggested a change to a more westerly migration. This has been exacerbated in the last week or so with a high pressure system over Scandinavia and easterly winds which has brought an unprecedented influx, particularly on the east coast but also throughout the country. The first record for Skye was long overdue and In my previous Blog I wrote about the first occurrence of this species in Skye. When tiny birds such as the Yellow-browed reach Skye there is lots of cover for them to get lost in so they can be extremely difficult to detect. The find by Neil and Martin in the middle of Broadford indicates that the species can occur in favourable conditions, virtually anywhere on the island. I've long thought that autumn migrants would 'trickle down' the island and that Point of Sleat was a likely spot for picking things up. Several visits in autumn have drawn a blank, but today in what were probably ideal conditions, two Yellow-browed were found, confirming my theory. In birding however, very little is ever predictable, and to pick up the unusual, there's every chance you will find it in the most unlikely place - just keep looking!