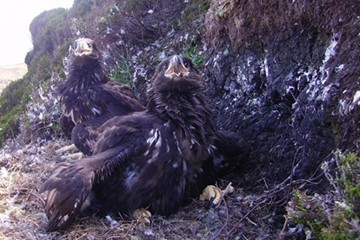 When planning consent was granted for Edinbane and Ben Aketil windfarms environmental impact assessments recognised that a collision risk did exist for Golden Eagles. However, no such risk existed for White-tailed Eagles, apparently based on the lack of observations, and despite predictions that the population was expanding. With a growing White-tailed Eagle population it was not surprising that a bird was found below Turbine 4 on Edinbane windfarm a few weeks ago, the victim of a turbine strike. A post mortem has been carried out by the SAC in Inverness but there are no other mitigating factors. It transpires that the bird had been ringed by Jon Brain as one of twins in North Uist, and is seen on the attached image. It is not known whether it was breeding but was of an age to breed. White-tailed Eagles are susceptible to turbine strikes, with well established evidence from Norway, and there are now several cases in Scotland. The perceived wisdom has always been that young inexperienced birds would be more susceptible to strikes, so the loss of an adult bird is a concern. In the absence of independent and systematic searches taking place below wind turbines in Scotland, strikes are likely to be much more common than we realise. An Osprey was killed at a windfarm at Moy recently. Though Scottish Natural Heritage monitor the number of strikes, it is unlikely to be accurate and reporting incidents is made on a voluntary basis. It is to the credit of windfarm staff at Edinbane who drew attention to the matter, but that may not happen at every location. It is unlikely to be the first strike locally, and sadly, it is unlikely to be the last with other windfarms approved and proposed.