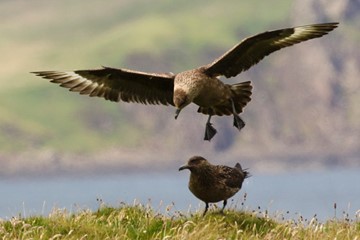 With favourable weather three of us embarked on a short dinghy trip to Staffin Island on 23rd June. It had always looked good for birds and according to Stephen (Botanical recorder) and Nick (Bryophyte recorder), there were no known records in their fields, so it seemed like a first recording visit, and part of a collaborative effort to document findings from our offshore islands. The island is grazed by cattle for most of the year and in winter regularly hosts a small flock of Barnacle Geese. A total of 22 species were recorded on the visit with 18 of them suspected to be breeding. Redshank is an extremely rare breeding bird on Skye so to find two pairs was a real bonus, along with two pairs of Curlew, a pair of Lapwing, and probable breeding Snipe, Ringed Plover and Common Sandpiper. As well as several non-breeding birds there were probably 6-7 pairs of Oystercatchers and a solitary Greenshank which could have been on passage. Common, Herring and Greater Black-backed Gulls were breeding, and probably 5/6 pairs of Arctic Terns. The only passerines were Skylarks, Meadow and Rock Pipits with Swallows occupying the old fishing bothy. Great Skuas have occupied the island for some years and there were 7 pairs, some of them non-breeders. It was remarkable that the waders seemed able to breed and produce young despite the presence of so many potential predators. In every other respect, the island seems to provide an attractive sanctuary, with a high density of breeding birds.