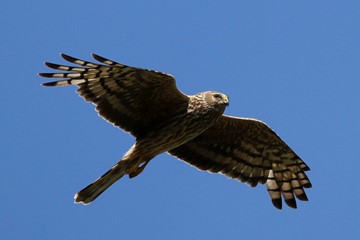 I have now been studying Hen Harriers in north Skye for 16 years. The population peaked at 12 pairs in 2010 then crashed to 5 pairs in 2012, and I have averaged 5 pairs since. In 2005,16 young fledged and in 2011, 15 young fledged. Because of fox predation, mainly of young, productivity has always been poor and in 2015 for the first time, no young fledged. This year I was confident there were at least 5 pairs. It is suspected that one pair may have abandoned their site early because of snow in early May. The remaining four pairs all laid clutches though two failed early in incubation. Having just returned from checking the other two I am depressed to report that the two remaining broods of four have been predated, probably by foxes. It is difficult to know how long this small Skye population can sustain itself in the face of zero productivity. Given the pressures of persecution facing the species when they move to shooting estates in autumn and winter, the overall prognosis is bleak. All in all, given that I am a committed european it has been a pretty desparate week. Some 20-30 field days of voluntary effort goes into each season, and it may prove difficult to sustain momentum in the coming years. Hopefully there might just be birds out there which are breeding successfully, so if you see any birds please let me know. There may still be a glimmer of hope in south Skye and Lochalsh, so lets be optimistic. The image shown is of a young female which you can tell from the eye colour. It built a nest in a new area and laid 6 eggs, 5 of which hatched. The nest was predated by a fox in the last week - evidence fox scat in nest and chewed feathers of young nearby.