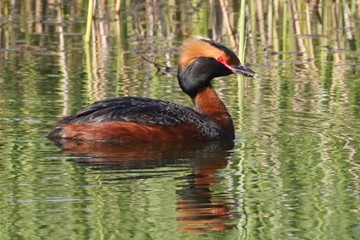 Although its almost a week since I returned from Estonia, it seems to have taken almost that long to get through all my images, a selection of which are now in the Overseas part of the Gallery with mammals in the Other Wildlife section. The tour was led by Steve of www.western-isles-wildlife.com ably assisted by Gary. We flew to Tallinn and then spent three days in the Matsalu Bay area of the west coast, three days based at Tartu on the east side and the final night in a Bear Hide south of Pussi. Estonia has become a major focus for british birders during the last 10 years and it is little wonder with over 180 species recorded in 7 days. In addition we saw European Brown Bear, Beaver and Elk (Moose) with calves. Biodiversity is extremely rich and the woodlands were full of birdsong. Breeding passerines from Estonia often pass through Scotland as migrants so it was an opportunity to catch up with Blyth's Reed Warbler, Marsh Warbler, Greenish Warbler, River Warbler, Barred Warbler, Wryneck and Red-breasted Flycatcher in full song. It was probably the wrong time to see Owls and Woodpeckers, but I did manage both Black and White-backed Woodpecker in breeding territories, both lifers for me. The most memorable experience of the tour for me, well not the bears which were spectacular, but it goes to a confiding pair of Slavonian Grebes on a small lake in the middle of Haapsalu, which put on a superb show and ignored any disturbance from walkers, swimmers and visiting photographers! The area caters well for birders with lots of reserves and observation towers. The weather throughout was superb, and the skye midgies are timid by comparison with estonian mosquitos, which were thriving in some of the damper areas, though the locals seem to be immune from them. Most of my trips abroad are on self-guided tours so this was my first guided trip - thanks to Steve and Garry for making it so worthwhile.