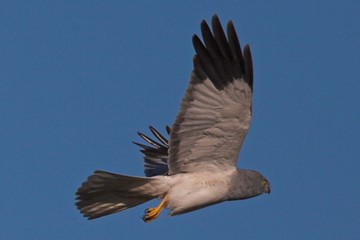 There is a Hen Harrier breeding survey throughout the UK this year and we are making a contribution by checking a number of 10km squares in Skye and Lochalsh. The core areas have now been monitored for 15 years though the breeding population has significantly reduced from the peak years of 2007-2012 when we averaged around 11 territorial pairs in the North Skye study area. Breeding pairs on Skye are often slow to settle and the majority are not on eggs until early to mid May. Birds can often be in territory early but disappear to perhaps breed elsewhere. The presence of skydancing birds is also a giveaway as is the fluttering flight of the male, usually with flaired tail and dangling legs - see the image. However this does not always indicate a pair and in my experience unpaired males which hold territories usually display a great deal. Males will also build cock nests almost to try and entice the females. But the female will invariably select the nest site. So far there are probably 5 adult males in the north Skye study area with at least 4 pairs so far. There is another pair in south Skye and a pair in Lochalsh. I'm still following up other reports and these can be extremely helpful in piecing together information. Males will also hunt 5/6 miles away from a breeding site so observations are always difficult to interpret. Notes on flight direction and behaviour are always useful when observations are made. Thanks again to everyone who sends records in.