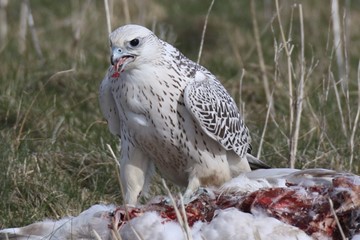 In my last blog post I lameneted on the fact that a group of us had spent three days on North Uist searching for a wintering Gyr Falcon only to have missed the bird by minutes. Persistence reaps rewards and on Wednesday we returned and managed to get some magnificent views and stunning images. Though the bird has been taking live prey it has also been taking carrion. A Mute Swan had collided with overhead wires and its carcass provided more than one ready meal. With the bird returning daily to feed it was simply a question of being patient and waiting for it to return to feed. After about 5 hours it came on to the carcass and gorged itself - after such a feed it was doing very little flying and simply sat around resting. There are several historic records for Gyr in Skye and many of them had an unfortunate demise by being shot. At one time the species was divided into Greenland and Iceland Falcon, but now the generic term is used. Bird originating in Iceland are normally grey phase whilst birds from Greenland are white phase. The North Uist bird is a juvenile white phase, a spectacular looking bird, which has now been seen by a good number of visiting birders. There was also a Great White Egret nearby which I was also able to add to my Scottish list. It would be great if either came over the Minch for another addition to my Skye list but for the moment I will simply reflect on what was another exceptional visit to the Uists. There are more images in the UK Gallery.