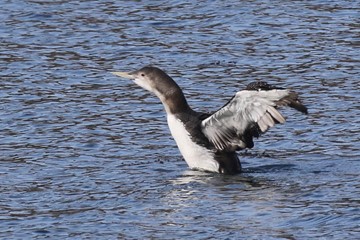 Dipping had become a bit of an illness - three days on North Uist trying to find a Gyr Falcon which we missed by 20 minutes; a day in Ullapool looking for a Firecrest, and finally, missing a Glossy Ibis at Kyleakin, again by minutes. Maybe not as bad as friends who spent two weekends on North Ronaldsay trying to find a Northern Harrier which eventually showed late on the 5th day - I really dont want to get like that. Luck was bound to change and the Catalonia break showed a change in fortunes. However, three Skye ticks to add to my island list in the last fortnight was something I could not dream off, and much of it is thanks to friends. Firstly, Andy Stables spotted a Firecrest through his office window at Portree and it was still around the next day for me to see and photograph it. Though I'd seen Ptarmigan elsewhere, my attempts on Skye had so far been thwarted until we found an obliging bird on Ben Aslak last Saturday. Martin Lumb had found a White-billed Diver at Uig Bay at the end of February but could not relocate it until yesterday when two twitching friends heading to Barra, found it again. It showed extremely well this morning, another species to add to the list. I had submitted a record of this species at Balmeanach on Braes about 15 years ago but it was rejected by the Scottish Birds Rarities Committee, so I could not really count it. Its been a terrific start to the new year. On Skye, rare birds are as much about birders as it is about the bird. Birders are thin on the ground, and invariably many of the scarcer records revolve round a small group of observers, many who contribute records to this site, some who wander around and others who work their own patch. Each way can bring rewards. Many birds on my own list are as a result of others finding birds, and to those other birders I am extremely grateful. It is an opportunity to share finds, to improve fieldcraft, and give others the opportunity to learn id skills, without putting the welfare of birds at any risk.