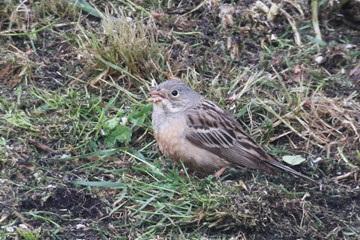 Despite the vagaries of the weather 2015 was another good year for the website with 177 different species reported from Skye & Lochalsh, the Small Isles and western parts of Lochaber. The biggest rarity of the year was the Ortolan Bunting found in Stephen MacDonald's garden at Morar in late June. It was a species which had been on my list of birds to find when we were in Catalonia a few weeks previously, and little did I realise it would turn up on our doorstep. Two new species were added to the Skye list, with a Nuthatch at Broadford on April 27, and a Firecrest at Isleornsay on November 2. The Ivory Gull at Uig was last seen on January 4 before spending a few weeks at Ullapool, and hopefully returning safely to the Arctic. Bee Eaters were reported from Canna and Eigg. A female Black Redstart at Dunvegan in May was also seen in August suggesting it might have summered. Also at Dunvegan, a male Yellowhammer was extremely unusual. Two Dotterel were reported on Bruach na Frithe on May 15. A Green Woodpecker was heard calling in Sleat in June and a Marsh Warbler was again singing at Uig on July 25. A Hoopoe was at Ardvasar in late August, when a Kingfisher was reported from Drynoch, and another was seen by a fisherman on the River Shiel on October 6. The rarest wader report was a Green Sandpiper at Point of Sleat on August 20. Little Egrets are now reported annually and a bird was at Breakish Obbe for several weeks to mid October. A Little Egret was also reported from Eigg. Mediterranean Gulls were first recorded on Skye in 2014 and up to two were found in Broadford Bay in December 2015. Unfortunately the December gales brought a few Little Auks to our shores, some of which did not survive. Its worth mentioning that a number of these rarities were found by non-birders, so thanks to them and everyone else who supports the site, and we look forward to an equally interesting 2016.