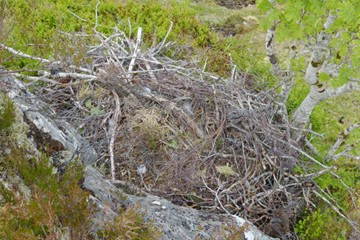 This year we had a national survey of our Golden Eagle population, cordinated by the RSPB, with this aiming to gauge the total number of breeding pairs across the UK for the first time since 2003. Like many other volunteers in Raptor Study Groups across Scotland, John Smith and I enjoy checking the breeding success of our local pairs in the Lochalsh area each year anyway. Being a national survey year, this was a particularly important one for us though.

We had enjoyed a good year in 2014, with 10 pairs confirmed laying eggs and 9 of these going on to fledge single young. We were optimistic of a similar outcome this year then when we detected 10 pairs on eggs again, with 5 more pairs not nesting or failing early in their nesting attempt (as is common each year). Sadly it all went downhill from this good start. Unlike in 2014 when the weather was predominantly mild, dry and settled, the spring and early summer of this year was incessantly wet and cold, with snowfall on the hills into May and June. Failure followed failure as we rechecked each of the 10 nesting pairs to see if they had young. The image shows a long failed nest with the addled egg remaining. It looked like we were going to have no young fledged this year at all (for the first time in John’s nigh on 40 years checking eagles.) Thankfully one of the last pairs we checked somehow managed to brood a single chick through the extremely tough conditions, and this went on to fledge the nest.

This was the last national Golden Eagle survey John will be involved with. Like many keen birders of his era, as a boy John was more egg collector than bird protector. When he settled in Scotland in the mid-1970s he was converted to a conservation outlook and has devoted his time since to monitoring our local Golden Eagles. Over the years John has seen a slow decline in our local population, with the survey this year showing 5 ranges which he once had occupied now to be vacant. Why? We can’t know for sure and it’s probably a mix of factors rather than a sole cause, with these possibly including increased human disturbance, a declining food supply and habitat degradation. Climate change may be an issue too, with our weather being variable and extreme over recent winters and springs; with some fine spells but unsettled times too, which could be impacting eagle prey. John himself wonders whether atmospheric pollution has been a cause, with Europe’s industrial emissions being dumped down within our upland’s high rainfall over decades, perhaps augmented by Chernobyl – he noticed big declines in many species from the mid-1980s onwards. Our declining eagle population will come as no surprise to many who head to our local hills, with many folk of John’s generation noting how scarce many of our bird species have become compared to decades ago. (A local decline in Peregrines highlighted by the 2014 national survey reflects this too.)

For me personally I’m extremely grateful for everything John has done for me over the years, “taking me under his wing” and sharing all his unique knowledge. It’s been a pleasure to hear his stories of past days watching these magnificent birds, but also sad to stare up at the crags that were once home to his “favourite pairs”, empty and lifeless now.