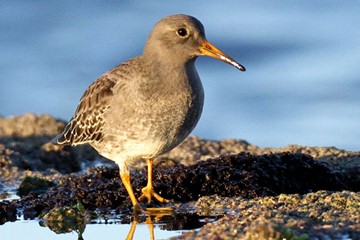 The United Kingdom is internationally important for its numbers of wintering waterbirds, and many of these are monitored annually by the Wetland Bird Survey (WeBS) counts. However, the WeBS counts are mostly made on estuaries and inland waterbodies, therefore leaving the majority of the coastline uncounted. The 2015/16 Non-Estuarine Waterbird Survey (NEWS) will focus coverage on these important and under-recorded habitats.

It is known that important populations of several species such as Purple Sandpipers and Turnstone occur around our shores outside of estuaries, and consequently are not monitored annually. Following the original Winter Shorebird Count carried out in 1985 and NEWS counts in 1997/98 and 2006/07, the third repeat of NEWSwill be carried out this coming winter.

The non-estuarine coastline is broken up into count sectors approximately 2km long, though some are shorter and some longer. There are 10 priority sections which have been selected at random in each region. These priority sections will be allocated first and then the others will be available for allocation. The survey runs from 1st December 2015 to 31st January 2016 and just a single count is needed, with all birds and mammals using the section recorded.

Volunteers are presently required for substantial parts of the Skye coastline. For more information see www.bto.org/webs-news or email webs@bto.org.