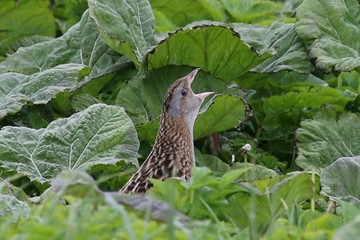 As always, a big thank you to all for the many reports of corncrakes that I received over the summer - not only do these reports help me with the survey, I learn a lot about the history of corncrakes and other wildlife on Skye. The first reports started coming in on 21st April and numbers built up quickly over the next three weeks as more birds arrived from their winter migration. After this good start I was expecting a bumper year for corncrakes! However, the total count for the island during the survey period was 32 calling males, down from 38 last year. This 20% drop in numbers and was seen across most of the corncrake areas with the exception of Islay, Iona and Durness. As with previous years, most of the birds were on the west coast of Trotternish, a good number were on Waternish and a scattering on other crofting areas of Skye. We will not know until next season how these birds fared regarding their breeding success.

To keep consistency from year to year and between areas around Scotland, the survey officially takes place between 20 May and 10 July and only counts birds that are calling between midnight and 3am. It provides us with a comparative figure rather than an absolute count of the birds but over the years will show trends of whether the population is increasing or decreasing. Ideally the surveyor chooses a still, balmy night to carry out the survey but Skye does not always produce many of those! Without doubt, 2015 was a difficult year for surveys and this may have contributed to the low count rather than a genuine drop in numbers. Weather wise, the spring was cold and the summer wet until well into August when things finally seemed to heat up. Corncrakes are famous for their ability to hide and they rely on vegetation of about 20cm in height to do this. With the slow growth this year they were very much reliant on nettles in particular early on. On the upside, the lack of tall vegetation to hide in meant that many people actually saw corncrakes – the downside is, of course, that the exposure also left them open to predation.

Through the summer I was monitoring corncrake activity with a trail camera and picked up some interesting footage. In particular, although the males had stopped calling, there was a mating pair on the 30th July which is relatively late. If the female successfully laid and incubated eggs they would only just be hatching out on 1st September demonstrating that even this late in the season, corncrake friendly cutting (starting from the inside of the crop and moving outwards) is really important. We are very fortunate as the mowing contractors and crofters here are very supportive of corncrake friendly mowing. This important technique can mean the difference between life and death to corncrakes nesting in the silage meadows.

I have been working on the corncrakes on Skye for 6 seasons now and every year is slightly different! Please feel free to contact me if you would like any more information. My thanks again to all contributors and for the support of this website – I look forward to hearing from you again next year!