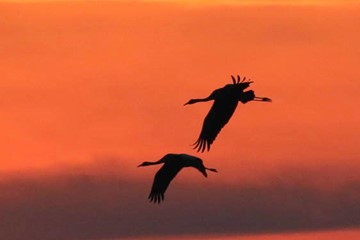 Germany is not the most popular of birding destinations but we have visited the northern Baltic coast in previous years, and this was an opportunity to explore the Brandenburg area west of Berlin, an area of rich farmland and lakes. Less than two hours from Glasgow it is an easy destination to reach and though it was cold and occasionally misty we experienced no rain during our stay and little wind. The area is well known for its autumn roosts of Common Cranes (Kranich) some which overwinter, but the majority are passing through en route to winter in Spain. The noisy spectacle of Cranes going to roost on lakes draws the crowds and there are many hides specifically built so the public can enjoy the experience. Thousands of European White-fronted and Bean Geese join the Cranes and it proved to be a unique birding experience against a background of terrific sunsets. In all we recorded 85 species the highlight of which was Caspian Gull, a new species for me. Marsh and Willow Tits were abundant and one of the highlights was finding the northern white-headed form of the Long-tailed Tit and there are some images in the European Gallery. There are special protection areas for Great Bustard and we managed to find a feeding flock of over 50. Unfortunately there was no success in finding some of the scarcer woodpeckers. White-tailed Eagles are well established and there were also sightings of Hen Harrier, Goshawk and Rough-legged Buzzard. There are a number of images in the Gallery. For information, Roger White has written a couple of guidebooks for north and east Germany, available through his website germanybirding.com.

On our way back from Glasgow we stopped off at Pitlochry to see a nice drake Ring-necked Duck.